As the saying goes, “To err is human”, it is impossible for any human to provide a perfect judgement, especially when things are too difficult to be seen with naked eye. In case of any poor decision in the game of cricket, things could take south as the game involves a lot of emotion and one cannot keep the calm when their winning moment is at stake.

Even when the on field players are not involved in the arguments, social media has given space for anyone and everyone to post their opinions on the same. On the umpiring issue that took place on the 2nd test match between India and England, Glenn Maxwell posted a tweet.

Poor third umpiring:The inexperienced Indian umpires faced the heat when Ajinkya Rahane was not awarded an out. For any of us, BBL was posing as one of the worst games in history with poor umpiring decisions. But, the first day of this test proved otherwise. While on field umpiring errors are quite common, an error from the third umpire’s side was not expected.

This blunder cost England a very crucial wicket. In Jack Leach’s over, Ajinkya Rahane attempted at hitting a ball which was caught by Ollie Pope, and the on-field umpire awarded not out for this. However, the vigorous appeal from Jack Leach and others from the England team took this to the third umpire.

The DRS initially showed a flat line when the ball went past the bat. Taking this into account, the third umpire Anil Chaudhary gave not out to Rahane. But, it was later divulged that Rahane glowed the ball and it was caught which should have been given out. Many players were pissed at this irresponsible decision and Maxwell posted the following tweet about the same: “How can a third umpire not look at that?” 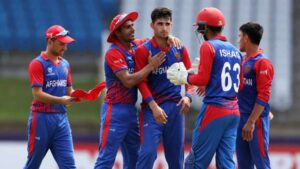